Last week I took a wonderful vacation with my wife up to Oregon. One of the things I love the most about traveling up there is renting a car and enjoying the open road. I don't recall doing that during the summer of 2008 when gas was $4.50 a gallon. But with prices at the still historically expensive but much more financially manageable $2.92-2.99 a gallon, there wasn't much to impede my delight of driving up Interstate 5 and taking in the sights around me. 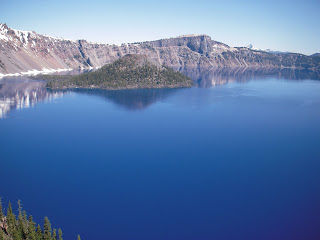 One of the first things I noticed on the ride up beyond the Grapevine but before the heavier traffic of Stockton and Sacramento was a change in the use of the landscape. I first noticed a gradual change starting about five years ago with what I call the Sideways Effect: where I used to see cotton fields blanketing both sides of the I-5 had been replaced by vineyards. This was right around the time the movie Sideways had become a critical and commercial success, which lead to an increase in sales of California wine. On this road trip, I noticed there was still plenty of vineyards with grapes growing, but the change we observed was a huge increase in the amount of corn fields being grown. My wife and I thought it might be crops used as feed for the cattle farms in the area, but there was only a slight increase in the number of cows we observed in the immediate region. When we reached the outskirts of Coalinga, which has a huge cattle holding pen, it seemed to me there were actually less cows than usual. Then it hit me: these are ethanol fields. We now have large sections of land previously allocated to grow material for clothing (cotton) or food and drink (grapes) that switched to growing a fuel source that is a net energy loser. And we wonder why this beautiful bounteous state has such a bad economy!

I say if you want to ride out the twilight of the Infinite Growth Paradigm intelligently, the most comfortable short-term solution is to ride the car we rented, a 2010 Toyota Yaris. We rented a red sedan model, and not only was it comfortable physically, but it turned out to be pretty comfortable on the wallet as well. Usually the drive up the I-5 requires us to refill the tank by the time we reach Santa Nella, one time a rental with really poor MPG only got us to Kettleman City before we had to get more gas. This time we made it all the way to Sacramento on one tank of gas. That's the kind of mileage I'm usually accustomed to hearing hybrid car owners brag about. I suppose hybrid and electric owners think they've got the higher road to ride out that twilight by being kinder to the environment. That may be so, but only as far as emissions are concerned. There are still seven gallons of oil in every new tire, the construction of the average car, regardless of whether it has an internal combustion engine or not, uses 42 barrels of oil. Pick your poison. 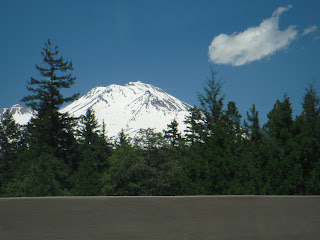 But I digress, I shouldn't be worrying about that stuff on vacation. And I certainly wasn't by the time we drove past Redding. There was a spectacular view of Mount Shasta on that sunny Saturday. Because we only had to stop once to refuel, we made it to Medford, Oregon by 3:45pm, a 10 1/2 hour drive. It was very relaxing staying at the Ramada Hotel there. We had a delicious dinner of pesto pasta and Pinot Noir at Vinny's Italian Kitchen with my sister, who recommended the place. There we finalized our plans for the next day, 4th of July, our Mom's birthday. My three sisters and I planned to surprise our Mom at Crater Lake, where she works as a park ranger. The surprise had been in the works for months and now we would finally know if we had been able to pull it off successfully or not. 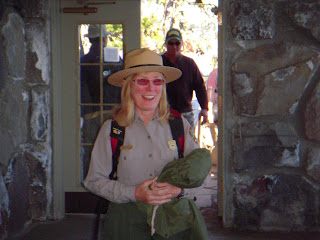 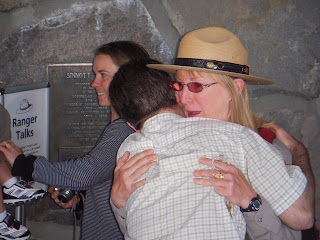 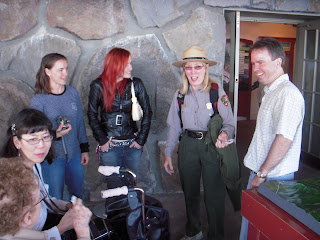 Our surprise turned out to be a complete success! It turned out our Mom was caught completely offguard. Her chagrin at not being able to get her birthday off of work because she had to give a presentation to a group of 10 that requested her turned to elation at discovering that group was comprised of loving relatives who traveled from all over just for the opportunity to shout, "Happy Birthday!" Once she finished her admittedly "addled" presentation, the party began. We had a scrumptious lunch at her apartment consisting of cheese and crackers, smoked salmon and avocadoes, fruit salad, potato chips and hummus. We washed it down with a few bottles of sparkling wine that my wife and I brought. Then we finished with a birthday cake that had some of the creamiest frosting I've ever tasted. Once that party wound down, several of us went back to Medford and had a wine tasting at RoxyAnn, where my wife and I bought a 2008 Pinot Gris that was really smooth. Finally, the night ended for us with dinner at India's Kitchen and then fond farewells to Mom, right as the fireworks started blasting off. 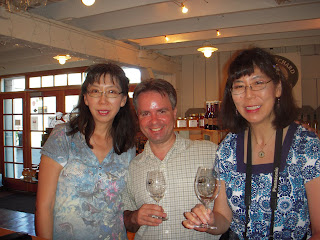 That was just the first leg of the road trip. The next morning we checked out of the Ramada and stocked up at Food4Less on some Shasta diet cream soda, a personal favorite. Then we drove to Ashland, Oregon for some caffeinated delights. We stepped into The Beanery, a coffeehouse I used to work at 19 years ago. There we bought bags of Allann Bros. coffee beans for co-workers when we got back to L.A. and for relatives we would be meeting later on our journey. Before getting back on the I-5, we couldn't resist getting an iced chocolate coffee drink from the Dutch Bros. drive-thru. That pumped us up for the trail back into California all the way to the Rodeway Inn at Rohnert Park, a little town just south of Santa Rosa that was inexpensive and a convenient location for a short drive to wine tasting in Napa Valley. 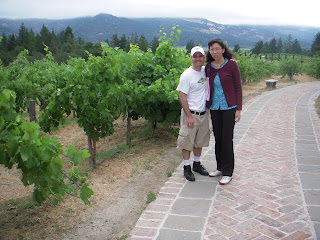 We began our vino imbibing on Tuesday morning at the magnificent Castello di Amorosa in Saint Helena. The idea was to start off with a big tour, then work our way down to progressively smaller wineries until we hit our limit. Castello di Amorosa certainly didn't disappoint in its size. It is a tremendous 107 room castle, built in the style of 13th century Italian. The tour lasted over an hour and included a barrel tasting of a 2009 Cabernet Sauvignon and then stopping in a tasting room to sample 15 other wines. We ended up buying a bottle of 2005 Merlot that had a strong jammy flavor but a supple aftertaste. All the wines there were very high quality. Though the winery itself was young, the winemaker Dario Sattui is a 4th generation Napa winemaker whose great-grandfather Vittorio Sattui found the winery V. Sattui, which we were told was celebrating its 125th anniversary. So that was our next stop down the road for another tasting and self-guided tour of their cellar. Finally, we stopped at a small charming winery called Milat. Tastings there were the least expensive in Napa, $5 refunded with any purchase. What a deal, and great wine to boot! They had a fantastic dessert wine and chocolate sauce, but what really surprised me was the 2009 Chenin Blanc. I had never really appreciated that varietal until this one, so fruit forward yet complex; constantly changing all the way down the tongue. What a treat! 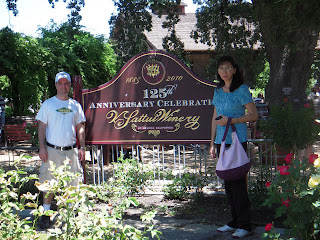 Totally wined out, we spent the next day exploring a town south of Rohnert Park called Petaluma. Petaluma is famous for many things, including being the location site for much of the filming of American Graffiti and for being the hometown of Winona Ryder. But we wanted to explore some of the deeper history of the town. While there were still many buildings in the historical downtown district still standing from the late 19th and early 20th century, I think we were a little disappointed with how yuppified it felt. A town of 50,000 people really shouldn't have more than a dozen overpriced restaurants spelled ristorante. Which is probably why we ended up eating at Hallie's Diner, where they served fantastic turkey sandwiches filled with some really sweet cranberry sauce. That wasn't the only highlight, there were other fascinating places in Petaluma. We enjoyed spending time at the Petaluma Adobe State Historic Park, where General Vallejo lived on his sprawling rancho during the 1830s and 1840s. They've done a great job of preservation of the building and recreations of how people lived, ate and slept in those days. I hope it lasts, it was a bit troubling that due to state budget cuts, there were no park personnel there. One other building I found fascinating was downtown; the historic Sonoma County National Bank building. Within this old bank is a thriving business appropriately called the Seed Bank. This business sells heirloom seeds with no GMO content. Every kind of seed from amaranth to watermelon. It was very encouraging to see the stomping grounds for a new generation of farmers. 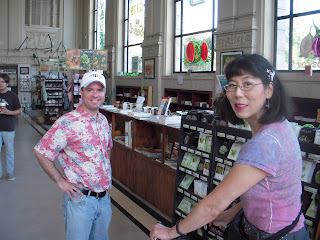 We spent the final evening of our road trip north of Santa Rosa in the town of Windsor, where my cousin lives with his wife and new baby boy. It was our first time seeing their beautiful baby and their beautiful house. We took them out to dinner, feasting on pizza, pasta, and a rich Pinot Noir from a Sonoma winery they love, Amphora. Then they treated us to dessert at Powell's Sweet Shoppe where in addition to engorging on peanut butter and chocolate gelato, we bought candy we haven't seen since we were kids; Zotz and Fruit Stripe gum. It was a very fun evening with them. The next morning we checked out of the motel and hit the road for home. We stopped on the way down in Paso Robles. It was a temptation to have one final day of wine tasting, but instead I showed some restraint and limited myself to picking some guides and brochures to plan a future road trip!

Posted by Robert Paulsen at 9:33 AM

Wow, I loved reading about your trip and seeing the photos! So glad you guys had such a great time.

It was fun, wasn't it? Wish it could have lasted longer.